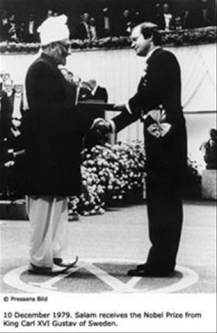 Also see his Nobel Banquet Speech as follows, the first line is about Pakistan, still some people (even some educated)  in Pakistan do not care for the truth and still live in there small little world blinded by the relegious descrimination.

Dr. Abdus Salam Nobel Banquet Speech
Source: Nobel Site – Salam Speech Abdus Salam’s speech at the Nobel Banquet, December 10, 1979Your Majesties, Excellencies, Ladies and Gentlemen,
On behalf of my colleagues, Professor Glashow and Weinberg, I thank the Nobel Foundation and the Royal Academy of Sciences for the great honour and the courtesies extended to us, including the courtesy to me of being addressed in my language Urdu.

Pakistan is deeply indebted to you for this.

The creation of Physics is the shared heritage of all mankind. East and West, North and South have equally participated in it. In the Holy Book of Islam, Allah says

“Thou seest not, in the creation of the All-merciful any imperfection, Return thy gaze, seest thou any fissure. Then Return thy gaze, again and again. Thy gaze, Comes back to thee dazzled, aweary.”

This in effect is, the faith of all physicists; the deeper we seek, the more is our wonder excited, the more is the dazzlement for our gaze.

I am saying this, not only to remind those here tonight of this, but also for those in the Third World, who feel they have lost out in the pursuit of scientific knowledge, for lack of opportunity and resource.

Alfred Nobel stipulated that no distinction of race or colour will determine who received of his generosity. On this occasion, let me say this to those, whom God has given His Bounty. Let us strive to provide equal opportunities to all so that they can engage in the creation of Physics and science for the benefit of all mankind. This would exactly be in the spirit of Alfred Nobel and the ideals which permeated his life. Bless You!

2 thoughts on “Tribute to Dr. Salam”